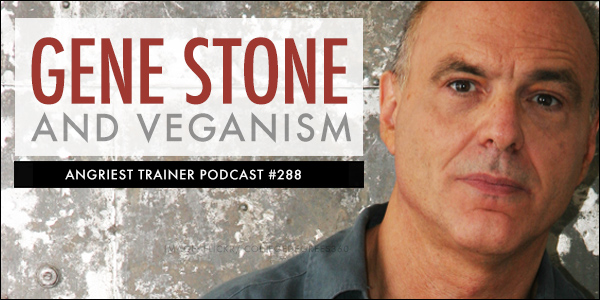 Vinnie and Anna welcome on the wonderful, inimitable, and incredibly smart Gene Stone, author of more books than we’ve all read in our collective lifetimes.

Gene Stone brings the Vegan movement to the Angriest Trainer Podcast with aplomb:

Additional books on mindset discussed in this episode:

A graduate of Stanford and Harvard, Gene Stone is a former Peace Corps volunteer, screenwriter, and journalist as well as a book, magazine, and newspaper editor for such companies as the Los Angeles Times, Esquire, and Simon & Schuster. He has also ghostwritten thirty books for a diverse lot of people, including theoretical physicist Steven Hawking, Yahoo! Chief Solutions Officer Tim Sanders, CNN Executive Vice-president Gail Evans, and TOMS shoes founder Blake Mycoskie. Gene has written many titles under his own name as well, including The Secrets of People Who Never Get Sick, which has been translated into more than 20 languages, and The Watch, the definitive book on the wristwatch.

Gene has also written many books on his primary interests: animal rights  and plant-based nutrition, including Forks Over Knives, and, as a co-writer with Rip Esselstyn, The Engine 2 Diet and My Beef with Meat. His current project is Living the Farm Sanctuary Life, with Gene Baur. Gene also serves on the board of several not-for-profits, including Ready For Rescue, which helps place animals from the New York City Shelter system into foster homes.