Andrew Weaver is the real person behind the Doughboy to Ironman project, which began in early 2011. He caught a case of adult onset athleticism on Dec 1, 2010. His current weight loss stands at over 100 pounds, with plans to nearly double that. He jumped on the NSNG bandwagon in December 2012. He is an ordained Lutheran pastor, who uses a lot less profanity than Vinnie. He has been happily married for 18 years, and is father of two creative and brilliant children. His blog is found at www.doughboytoironman.com He isn’t an ironman yet, but it about halfway there. His kids think he’s awesome. They’re right.  Take it away, Andrew…

Why is this in my race bag?

It’s 7am. I’m checking in at packet pickup to take on the hardest uphill climb I’ve done in my short life as an endurance athlete. I’ve done half ironman races, I’ve done a 5k open water swim, I’ve gone places that the person I was 110 pounds heavier could not have imagined a few years ago.

Yet the uphill battle I am expecting this day (a 25k trail run that has climbs so steep, everyone ends up on their hands and knees, some of us in prayer not to fall off the mountain to our deaths) is met with another uphill battle: another freebie in the race bag that makes me wonder “why did I join up with the endiurance community if this is the crap people still eat?” 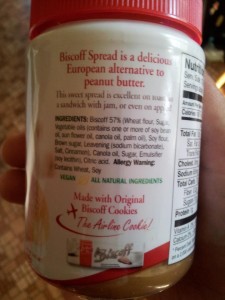 There is a technical term for this: cognitive dissonance. That’s when your mind holds two different thoughts at the same time, which cannot be reconciled. We don’t usually think about this consciously, but when we believe one thing but act as if we believe the opposite, we’re living in cognitive dissonance. When Ted Haggard was leading the charge against homosexual people having rights, meanwhile paying a male prostitute with meth, right there is a solid hardcore example of cognitive dissonance.

The food around endurance sports is a less dramatic, but just as accurate, textbook case of cognitive dissonance, and precisely the source of my own frustration that made me wonder why I was the same weight after two years of endurance sports. Looking for off-the-beaten-path answers is what led me to find first Vinnie, then low carb, then paleo. And all of these voices need to be much louder within the endurance community. We’re made up of a lot of people who may look fit, but are carb addicts. If you find this stuff in a bag at a trail run, where I expect a less modern, more natural vibe, it’s clearly everywhere.

If you look around the world of triathlon, as well as the three individual sports that go into them, you will find a vast array of people, many shapes and sizes. This is a good thing. Without that, many of us would never even bother. I am glad to have found a community that invites me to be a part of it, as one of the slowest, and still largest out there. It has inspired me to blog, and to encourage others who don’t see themselves in the category of “athlete.” There is nothing like the encouragement that the back of the pack receives at a triathlon, marathon, or even your local 5k.

But even with my weight loss so far, I am still a very large guy, and I don’t want to stay this way. I took a hard look at things after my first year in endurance, going from couch to half-marathon and an Olympic distance triathlon in my first year. The progress in distance was great. But the weight loss was not happening. I had to take a serious look at my relationship with food. That landed me in the 12-step world, for which I am truly grateful. But even in those first months, I had convinced myself that all this talk of eliminating sugar entirely, well, that didn’t apply to me since I am now an endurance athlete. We fuel on carbs, right? So I was off Snickers bars (ate two on the bike in my first tri in 2011) for the “much healthier” box of clif bars. I was seeing weight loss under my new self-defined abstinence, so I was sure it was working. My first OA sponsor really tried to warn me that I was playing with fire, that there was little difference. I said “oh yeah, yeah… I know.” But I didn’t. After a disappointing DNF at my first half-iron attempt, I fell off the wagon, and was again overeating as an addict, and of course I regained a lot of weight.

The endurance world is made up of high achievers and tough-it-out types. But we spend a lot of time making it harder on ourselves than we need to. At the middle and back of the pack are many of us who still struggle with weight, but use the long training hours and races as an excuse to indulge in too much food. Check out the food tent at any big race. Even after the race, it’s quick carb city. The red herring of “carb loading” has gone so far from what it ACTUALLY meant for elite runners who would deplete reserves to then jam them back quickly, to now being an everyman’s parade of pasta for days before and after an event. It’s human nature to take the excessive part of a method and forget the other side. (How many Mardi Gras partiers actually observe a disciplined Lent?) Check out the conventional wisdom from this article on active.com, a major player in the mainstream endurance world. Carbs=good, fat=bad.

The current grab-anything-that sounds-good trend that is keeping many endurance people on the sugar wagon is good old chocolate milk. One magazine prints an article comparing chocolate milk to other drinks for recovery, and instantly establishes a paradigm we’re all dying to hear: it’s good for you! Recover right! The chocolate milk people wasted no time in jumping the popular wave, and have pro triathletes on board for marketing. Two months before I found the NSNG way, I was considering producing a “Become One” video contest entry to win a trip to Ironman Kona and train with Hines Ward along the way. I hope Hines finishes Kona strong. I hope the people who won the contest get to compete and finish. But I know that as long as I stayed on the chocolate-milk-as-recovery train, I was still living in my sugar addiction, undoing all the progress I made with training.

Somewhere toward the end of the second year of my new life, I decided to start looking for an answer to a question that I was not hearing anyone ask in the endurance world: why do we rely on sugar so much? Is there a low-carb option? I was already sympathetic to the paleo mindset before I knew that label. I have been a small-farm, vegetable CSA, pastured chicken, grass-fed beef, raw dairy advocate for a long time. But there was a disconnect. I had been drinking the kool-aid (actually gatorade) of the conventional wisdom that constant streams of highly refined carbs were the way to fuel any long distance activity. But these were the substances that caused me lifelong trouble. Was there a way out of this vicious cycle? Or would I just continue being the fattest guy at the race?

IF you’re reading this post, then you know the rest of the story. First through the Angriest Trainer podcast, then with an expanding web of resources, the names Jimmy Moore, Mark Sisson, Bob Seebohar, Gary Taubes, William Davis, Nora Gedgaudas, Phinney and Volek, all became part of my library.

I am in season three of becoming a runner and triathlete. I am still between Doughboy and Ironman. And I still have what an addict needs to properly call a relapse from time to time. But now when I open a swag bag and it’s full of cookies, nutrigrain bars, gels, or even a huge jar of spread that’s nothing but sugar and industrial seed oils, I just pass it along. And as I’ve joined a facebook group with one of those very telling names “Run Disney So I Can Eat Disney” I enjoy the camraderie and fun of groups like this, but I’m sure to say “hey, the bacon challenge is fun, but it is what we should be fueling on anyway!”

The NSNG voices are growing, the paleo movement is making inroads into endurance (when they’re not slamming “chronic cardio”) and when more people have their ah-ha! moment as Vinnie nails the reality of all the porta-potties, gels, and fat people at triathlon (I resemble that remark), you’re going to see a movement take hold. There’s no reason we have to keep blending the sport that we love with the “food” that gives us the weight we’re trying to lose through that sport.

There is another way. Getting off the couch is a great first step, and I applaud anyone willing to do it. Food is usually a tougher enemy. But if I can make a change and willingly put on lycra in front of other people, there’s no reason I should let oreos bring me down.

I’m not perfect at this, and my current stretch of weight loss is slow. But when I dropped grains and sugars, I reversed type 2 diabetes and significantly lowered my triglycerides. This stuff works. And it can work for all the distance activities I want to do. I just have to look the other way when the big sponsors push all their carbage in my face.